Electronic sports (esports for short) consist of amateurs and professionals competing in competitive video games. Many question the title, as esports require significantly less physical work than traditional sports, but it should not be forgotten that-in a serious championship-it demands much more mental effort from the competitors, for up to 24 hours. In addition, most professional esports athletes spend up to 8-10 hours a day practicing, learning new strategies and tactics, and analyzing past matches-their passion is their full-time job.

Although hundreds of millions of people worldwide belong to the esports community, there are still few esports athletes in Hungary who were able to keep up with the international level. This is why our association organizes regular competitions for Hungarian players, as these provide an excellent opportunity for them to gain experience at home first, in professional conditions, and they can then bring their experience with themselves to foreign cups.

Since 2017, the staff of the Hungarian Esports Sports Federation has been working tirelessly to make gaming and esports much more popular in Hungary, and more accepted socially. In order to reach our goals, we are organizing regular competitions, cups, and tournaments, as well as educational lectures at universities, which can, in several ways, reach the same level as foreign examples, while being able to move a lot of people at once.

Our other big goal is to be the first in Hungary to create the legal system that will enable the creation of professional and amateur esports competitions with the help of the appropriate regulations. As a first step, even before our establishment, we paid special attention to laying the foundation of our operations in accordance with the local sports laws.

Our federation has members with outstanding knowledge both domestically and internationally and partners, who are playing important roles in the market-together, they help to provide the highest possible level of professional and legal support for domestic esports players and teams.

Since the summer of 2020, we have been working almost non-stop to be able to launch our Hungarian Esports Championship with a total prize pool of HUF 10 million this autumn, with games like Counter-Strike: Global Offensive, League of Legends, Valorant, and FIFA.

The first qualifying matches of our Valorant tournament started at the end of October, followed by the CSGO and LoL qualifying matches in November. The most exciting matches will start in the second part of this year, as the best domestic teams will compete for cash prizes outstanding in national levels as well.

We are not stopping here, however, as we can safely say that 2021 will be the biggest milestone in the history of our federation, as another season of Stay & Play Gamer Cup, encouraging staying home and playing, will start, and so will the FIFA 21 competition of the Hungarian Esports Championship.

We will be focusing on university students with a special University Championship in February, and the spring season of our CSGO individual championship will arrive in March. Our LoL, Valorant, and CSGO team competitions ended at the end of May.

We are returning after a brief summer break with our Stay & Play cup at the end of August, the autumn season of our CSGO individual championship is starting in September, and the Hungarian Esports Championship is arriving once again in October, which for sure will make CSGO, LoL, and Valorant lovers happy. The following year will be closed with an exciting FIFA 22 tournament.

Over the past three years, we have been constantly working to make fans of the most popular esports games happy with as many exciting esports events (competitions, cups, and tournaments) as possible. Thanks to this, we were the ones in Hungary, who helped RIOT Games to organize its first Hungarian professional League of Legends tournament. We also arranged a lot of self-organized events.

In 2017, for example, together with TheVR, who has the largest player community of the country, we bought the first official Hungarian PUBG Cup-with its professional online streaming, we were able to reach nearly 150000 people.

In the same year, with the sponsorship of HyperX, we brought the Rainbow Six Siege Media Cup, where faces of the Hungarian media were able to compete against Hungary’s ten most popular gamer influencers in our hard mode championship.

A year later, we continued the work we started, as we launched the largest official FIFA 19 esports tournament in Hungary, in which more than 2500 individuals could take part with the involvement of Hungarian football clubs. Moreover, in September, we were able to launch the country’s first independent professional championship system with an official federal background.

The work continued in 2019, and we organized the FIFA Spring Cup together with seven Hungarian football clubs, followed by the FIFA Agency Cup in order to educate influencers. Thanks to the experience we have gained so far, we were able to arrange our FIFA Championship incorporating two divisions, which was a huge success among Hungarian players.

We can safely say that 2020 is the most exciting year in the history of the federation, in which we have been able to indulge in the Hungarian gaming scene much more than previously. In response to the coronavirus situation, we launched the Stay & Play Gamer Cup (with some charity action as well), wherein Fortnite, Counter-Strike Global Offensive, PUBG, League of Legends, FIFA, and Rainbow Six Siege could compete for high money prices.

Thanks to the professional results of the past years, the work with the Hungarian Football Federation could finally begun, while we quickened the fans of FIFA games with famous Hungarian football players and esports athletes together with Hungary’s largest sports site, National Sports Online. In the summer, we bought a hybrid event with the support of Red Bull in the form of the Lupa Beach Ball Amateur Cup, where football lovers first competed in beach soccer and then in FIFA 20.

Of course, we did not forget about the simulation fans in Hungary either, so we bought the iRacing Hungarian SIM League for them, and then in autumn, we organized the second season of the Stay & Play Gamer Cup.
Most recently, we announced our HUF 10 million Hungarian Esports Championship for CSGO, League of Legends, FIFA, and Valorant fans. We have also patched our competition calendar for the following year, resulting in 2021 being the biggest milestone in the life of the Hungarian eSports Sports Federation.

With the help of our professionals with more, than 10 years of experience, we can provide effective support and professional advice to practically any company on issues related to gaming and esports.

If required, we can provide our clients creative planning based on solid foundations, a diversified campaign strategy, professional competitions, and high-quality livestreams. We always strive to achieve the goals of our current partners in the most effective way possible. 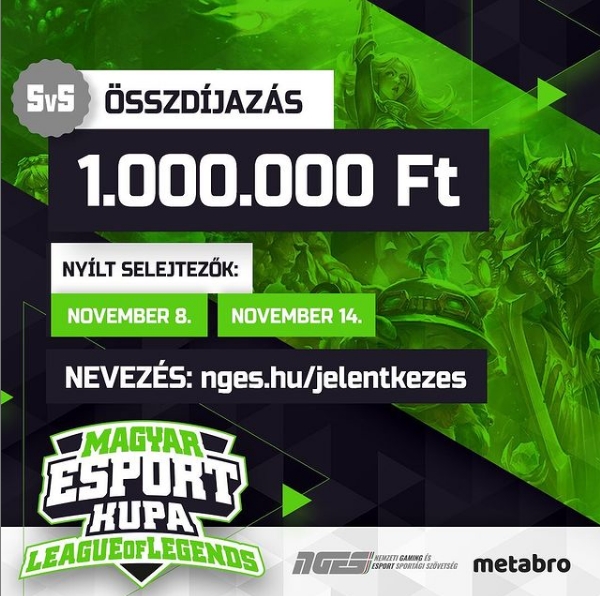